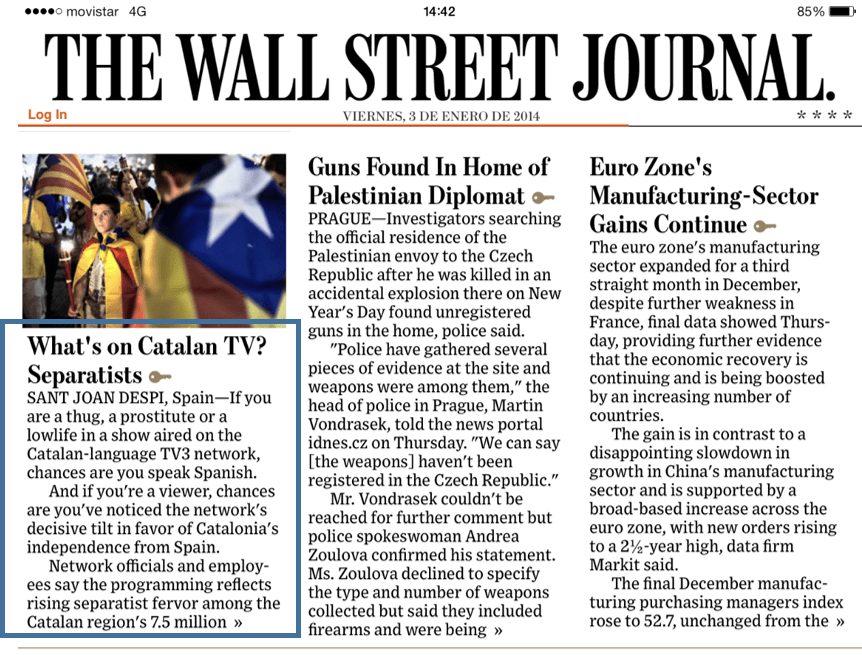 SANT JOAN DESPI, Spain—If you are a thug, a prostitute or a lowlife in a show aired on the Catalan-language TV3 network, chances are you speak Spanish.

And if you’re a viewer, chances are you’ve noticed the network’s decisive tilt in favor of Catalonia’s independence from Spain.

«This is Catalonia’s public and national TV,» said Nuria Amat, a union representative at the network, which is run from this Barcelona suburb by an appointee of the regional government. «The way we see it, we are a nation without a state.»

In recent months, however, the network has come under fire for what critics, including some current employees and former executives, call excessive bias.

TV3 does offer a counterpoint to the dominant line heard on the nationwide, Spanish-language channels that reach three-fourths of the television audience in Catalonia. Those channels largely ignore the independence movement and emphasize the view of the central government in Madrid, which calls the planned referendum illegal.

TV3 was nonetheless criticized widely in Catalonia for its coverage of the last regional day, on Sept. 11, when Catalans formed a 400-kilometer (250-mile) human chain. TV3 aired interviews with boys and girls as young as 11 uttering separatist slogans while clad in the red, white and blue colors of the independence movement.

«Sometimes TV3 is worse than Soviet TV was,» said Alfons Quinta, who was TV3’s managing director in the 1980s and is now retired. «I watch Cubavisión, and it’s no worse than TV3.»

TV3 was launched in 1983, eight years after the end of the Franco dictatorship, to promote the Catalan language. Franco had sharply restricted languages other than Spanish on TV.

Its evolution over the past decade as a more overtly political voice exemplifies how regional governments in one of Europe’s more decentralized countries promote regional identities and agendas.

Most of Spain’s 17 regions fund their own public TV networks with taxpayer money, and many use them to air political views supportive of the party in power locally.

In November, Valencia’s cash-strapped government made headlines by shutting down its regional TV network, saying it would rather keep schools or hospitals open.

A shutdown of TV3, however, would be unthinkable. The network, which will cost Catalan taxpayers €225 million ($310 million) this year, is part of what the regional government calls a «nation-building» campaign, and has been protected from large-scale budget cuts. It receives no federal funds but does have advertising revenue in the tens of millions.

Like other Catalan media, TV3 is monitored by a regional government agency for balance and standards.

Employees defending TV3 note that it has its own standards committee as well to safeguard its editorial independence. Critics say Catalan nationalists have been promoted to senior network positions for years, making government interference unnecessary.

Some employees concede that at times the pro-independence programming has been excessive.

The night of the human-chain demonstration, TV3 broadcast a laudatory biography of pro-independence activist Eric Bertran, who at age 14 threatened to vandalize shopping centers if they didn’t replace Spanish-language signs with Catalan signs.

And last year TV3 broadcast «Hola, Europa,» in which 31 prominent Catalans expressed support for independence. The program was billed as a documentary, but not a single critic of pro-independence positions appeared.

«The honest thing for TV3 now would be to broadcast a documentary with people expressing anti-independence views,» said Ramón Espany, a union representative.

As for the Spanish language, it is rarely heard on TV3. Josep María Guardia, a popular blogger, recalls that the only Spanish speaker in the network’s first soap opera, produced more than 20 years ago, was a servant with little education.

Lower-class characters today account for most of those who speak Spanish in locally produced TV3 shows. Spanish-language movies are dubbed into Catalan.

But Mr. Guardia, who calls himself as a wavering member of the pro-independence camp, said that most Catalans speak Spanish at least as well as Catalan, if not better.»